Bid arrivederci to everything you should be doing as Italy’s magnetic pull draws you closer to everything you want to be doing—like this 6-day jaunt across its most dazzling regions. Roam Tuscan hills and ancient walled cities, stroll along enchanting Venetian canals and beneath Bologna’s elegant porticos, and let the lemon-scented air of the northern lakes region refresh your soul. You’ll dream of the blossoming Italian Renaissance in Florence and the romance of star-crossed lovers in Verona as Italy’s eternal charm claims yet another heart!

Included:
• Transportation by deluxe motorcoach
• Monolingual Tour-escort in English
• Accommodation in 4 stars hotels
• Visits to Assisi, Siena, Florence, Bologna, Padua, Venice, Verona and the Northern Lakes Region (Sirimione and Como)
• Entrance tickets to St. Mark’s Basilica in Venice with “Skip the Line”
• Meals as per itinerary (please inform us at the moment of the booking, in case of any food allergy or dietary restrictions)
• Visits with an expert local guide as per itinerary
• Complimentary Wi-Fi on board to be in touch with family and friends
• Headsets to follow the information provided by the tour leader and local guides
--------
Not Included:
• Tips
• Porterage service
• Drinks
• Entrance fees to monuments or museums when not mentioned
• City tax for overnight stays (according to each city council rules)
• Everything that is not mentioned in included
--------
Optional Extras:
• Airport Transfers
• Pre and Post Accommodation
• Pisa Excursion from Florence
• Deluxe Canal View in Venice

Pricing is based on 4-star premium accommodation category. 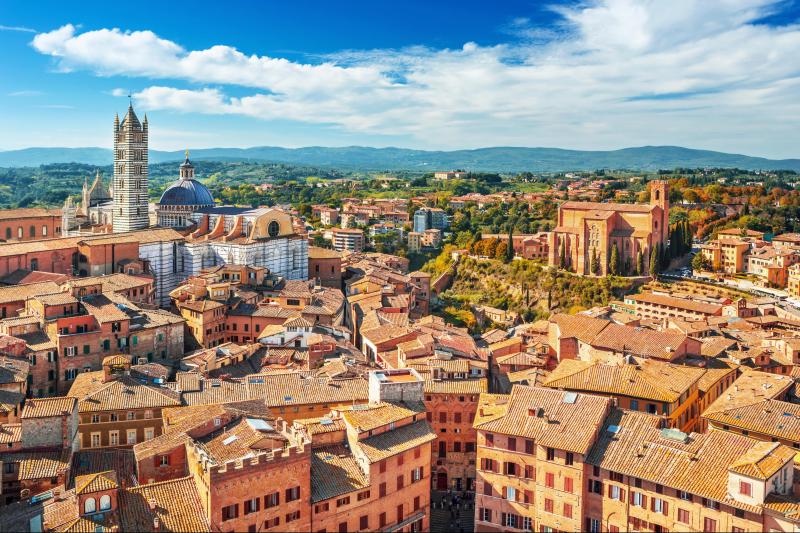 Departing at 7:15 am by a deluxe coach, you will arrive in Assisi, where you can explore this tiny town, surrounded by walls built in the middle ages, at your own leisure. Make time to visit the Basilica of St. Francis, where you will see masterpieces by Giotto and Cimabue, and to have lunch (not included). Board the bus for Siena, a medieval town surrounded by ancient walls that are known for the Palio, an annual summertime horse race around the shell-shaped town square, Piazza del Campo. Next, you will continue on to Florence, where you will check in to your hotel before enjoying dinner and a well-earned night of rest. Meals: D

After breakfast, you will spend the day venturing around beautiful Florence, the “Cradle of Renaissance, where, with the help of Michelangelo, Italian art reached its pinnacle. Based on Etruscan-roman origins, the city flourished in the Middle Ages as a free “Comune” and was further refined during the Renaissance. You will be fascinated by the uncountable monuments, churches and buildings as Santa Maria del Fiore, more commonly referred to as the Duomo. On your visit, you will be amazed by its magnificent dome built by Filippo Brunelleschi. Cross a small piazza to see the “Campanile” tower (partly designed by Giotto) and the Baptistery, with its bronze doors where Michelangelo imagined the “Gates of Paradise.” In the heart of the city, you will see Piazza della Signoria, Palazzo della Signoria (also known as Palazzo Vecchio), and the Basilica of Santa Croce. Lunch in a typical Tuscan restaurant in Piazza Santa Croce. Spend the afternoon strolling the cobblestone streets of Florence on your own or take a short trip to Pisa (optional), one of the four main historical Marine Republics of Italy. There, you will tour the Piazza dei Miracoli with the Duomo, Pisa’s symbol “the Leaning Tower” and the Baptistery. Dinner at leisure, overnight stay in Florence. Meals: B, L

After breakfast in Florence, departure to Bologna. There, you will discover the elegant city centre with its “porticos”, it’s shopping streets and so on. From Piazza Malpighi you will walk to Piazza del Nettuno and Piazza Maggiore (Neptune square and Major square) in the heart of the city, then King Renzo’s Palace; Palazzo Podestà and the Basilica of San Petronio, one of the biggest in the world. Bologna, it’s a real gourmet’s heaven…do not miss a tasty meal at your own leisure! In the afternoon, continue toward Padova, with Sant’Antonio Basilica: one of the most visited churches by pilgrims of the Catholic world. Later in the afternoon, arrival in Venice: the City of Love, one of the most romantic cities of the whole world and, undoubtedly the most beautiful city built by man! Check in at your hotel for dinner. Meals: B, D

After breakfast, enjoy your private water-taxi transfer to Piazza San Marco, with “Skip the Line” tickets to visit the splendid St. Mark’s Basilica and, after this, check out the most iconic places of the “Floating City”: the Palazzo dei Dogi, symbol of Venice’s glorious past, the legendary “Bridge of Sighs”. Spend the afternoon roaming along Venice’s canals at your leisure and then return to the hotel and overnight. Meals: B

After breakfast departure heading to the famous city of Verona: the town of Romeo and Juliet. A walk through its narrow streets will allow you to get in touch with Verona's varied and fascinating past: traces of its splendid Roman origins, as the world-famous Arena and its medieval structures, its magnificent renaissance palaces, as well as the impressive fortifications protecting the city. The combination of art and history will fascinate you. You will proceed to Sirmione, where you will see the Lake Garda, the largest lake in Italy. Enjoy the area, rich in vegetation including lemon trees, oleanders and magnolias. You will see the Sirmione cape, the castle and the ruins. Then, in the afternoon, we will arrive in Como and enjoy the picturesque view of Lake Como. Free time to visit Como, one of the most beautiful cities in Italy. After the visit check-in at the hotel. Dinner and overnight. Meals: B, D

Breakfast and departure to Milan, end of the tour at the central railway station. Meals: B