Delights of the Dolomites

It’s hardly fair, but some countries really do have it all. As if Italy’s steamy espressos, stylish citizens, and smooth wine weren’t enough, you can add the stunning, sky-high Dolomites to that list. This four-day adventure takes you into a world of snow-dusted mountains, pristine blue lakes, and cozy mountainside villages. Whether it’s hiking, daydreaming, or sightseeing you’re after, we’ve got the perfect backdrop, from Cortina d’Ampezzo (a favourite setting for movies and host to World Cup and Olympic events) to deep and clear Lake Braies!

Included:
• Accommodation in 4-star hotels
• Apples and speck tasting in the Dolomites region
• Transportation by deluxe motorcoach
• Meals as per itinerary (please inform us at the moment of the booking, in case of any food allergy or dietary restrictions)
• Visits with an expert multilingual local tour leader as per itinerary
--------
Not Included:
• Tips
• Porterage service
• Drinks
• Entrance fees to monuments or museums when not mentioned
• City tax for overnight stays (according to each city council rules)
• Everything that is not mentioned in included
-------
Optional Extras:
• Pre and Post Accommodation in Milan
• Airport Transfers

Click Book Online above for 2020 pricing!
----
• All prices are per person
• Free accommodation for children up to 6 years old sharing the room with their parents
• City tax not included (paid directly at the hotel)
• Drinks are not included with meals 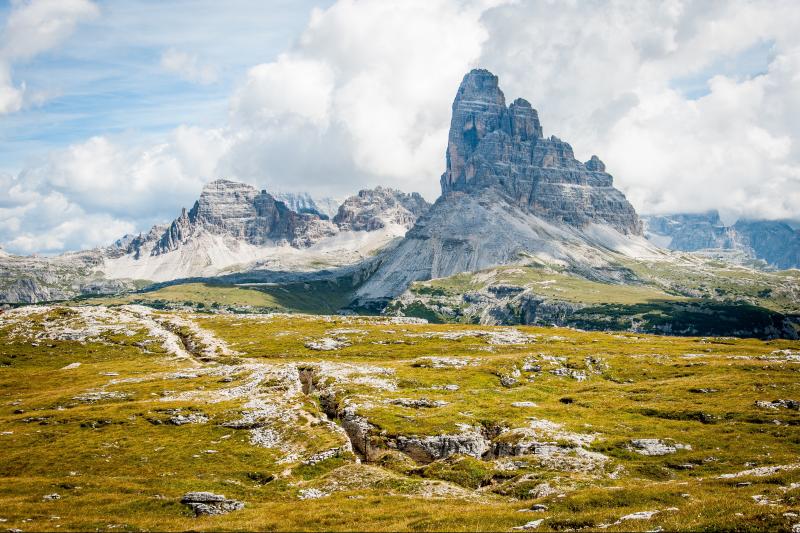 This four-day adventure takes you into a world of snow-dusted mountains, pristine blue lakes, and cozy mountainside villages

Departure from Milan in the morning (departure is also possible directly from Verona, joining the group at 10:30 am). Outgoing to Verona having a short break to discover this beautiful city. This town is known all around the world for its Coliseum called Arena and main symbol as Juliet balcony, that represents the most important love-story of the literature, written by Shakespeare and inspired to real facts of the two enemies Verona families. We’ll visit the old square of the market, Piazza delle Erbe, surrounded by some of the most famous buildings, like Torre lamberti, the City Hall, the tribunal. Free time for lunch.

Next, departure to Cortina d’Ampezzo with the route through Val di Fiemme, Val di Fassa and Passo Pordoi, some of the most wonderful valleys of the Dolomites area. This region includes many small villages typical of a mountain setting. We stop in Canazei, an important place for tourism in all seasons, due to the wonderful view given by this part of the Dolomites that call thousands of tourists every month. Short visit. Cortina d’Ampezzo, probably the most renowned one because of its historical importance in Italian summer and winter holidays since the 1950s, is in the middle of a large valley of Boite. Cortina is not only a tourism resort but also the centre of traditional works, as for example, wood manufacturing. Depending on the arrival time, we invite you to a free tasting of two beautiful local products: Trentino apples and speck. Overnight at the hotel.

Breakfast at the hotel. Outing to Lake Misurina (situated in a perfect position among woods and the Dolomites tops, Three peaks of Lavaredo the most important ones, probably one of the best places for alpinism experts). Then, way to Lake Dobbiaco, with a strange and shining colour emerald of its water that makes it as unique in the world. Visit of Val Pusteria and Val Badia, probably the most typical valleys of the region, having a stop in a typical village to have free time for lunch. After that, we will cross Gardena Pass coming back to Cortina through the amazing Giau Pass. Again to Cortina to have free time for the rest of the day. Overnight at the hotel. Meals: B

Breakfast at the hotel. The route through the several Dolomite Pass: Passo Falzarego which is situated in the basin that surrounds Cortina. Between Val di Fassa and Val Gardena, it gives us a marvellous view, both in winter and summer. Through Passo Costalunga, we arrive at Lake Carezza. Stop to have a look at this wonderful lake. Free time for lunch. Then, departure to Merano, the second biggest city of the province after Bolzano. Famous worldwide for its Christmas market, Merano is also a charming and amazing cultural and historical centre. Visit the old town and free lunch. The second half of the day dedicated to Bolzano. An important commercial centre in the Middle Age, it has increased its industry productions during the World War. Tourism still represents the first resource of the local economy. Visit of Duomo: the Cathedral, with a gothic style, is considered as the symbol of the town; Dominican church, painted with frescos of Bolzano old school. Finally, we’ll visit the main central streets, as Via dei Portici, the core of the Medieval town. Rest of the evening free for your personal visits. Overnight at the hotel. Meals: B

Breakfast at the hotel. Departure to Trento, capital of the region. The city is dominated by the castle, known as del Buon Consiglio, the symbol of the House of Habsburg which dominated the district for many centuries. Santa Maria Maggiore, built in the XVI century and one of the first work of Renaissance and Gothic age. Palace Geremia, the building that represents the XVI century. Free time for lunch. Departure to come back to Milan and end of the services. Meals: B